Could those vying for the Iron Throne get life insurance? We've set out to try!

It’s officially Game of Thrones season once more. Is anyone else excited to see what happens in the final series?

We’ve got our own ideas going around the office about who will win or lose the Iron Throne, but we thought it was a shame none of these soon to be dead royal hopefuls had life insurance to make sure those castles and armies keep running smoothly no matter what may come. Dragons and Wildlings don’t feed themselves after all! With that in mind, we’ve created a life insurance quote for Jon Snow, just in case he wants to make sure his sisters of Winterfell and brothers of the Night’s Watch are financially secure.

Figuring out what sort of quote he might need was a bit of a challenge, but our office super fans were up to the task. See below to explore what details we used, and how we came up with the quote.

WARNING: We have done our best to avoid spoilers for Season 8, but in order to determine the details required for our quote, there are spoilers from previous seasons.

How we determined a Life Insurance quote for Jon Snow

Jon Snow, as of Season 8 is age 23. We assumed a June birthdate as he is, after all, a Summer child.  We figured that his family could keep Winterfell going, and feed a good few Starks and Wildlings for about €100,000. And just in case he survives the final season battles to retire in peace, a bit of accelerated serious illness cover at €50,000 to see him through in ease and comfort. We figured 15 years was a good length of time for his coverage to last.  We made sure that his rates would adjust appropriately for inflation and that he would have the option to renew without a medical examination.

For much of the application we assumed some pretty standard, if modern, details- an average income, single marital status (the insurance companies don’t allow ‘it’s complicated’ as an option) and we used Game of Thrones actor Kit Harrington’s height and weight. We set his occupation as being a managing director who engages in manual labor, as none of his various titles were available occupational options.  He’s certainly no Tyrion, to ‘drink and know things’ (in fact, it’s on record he knows nothing), so we guessed that his alcohol consumption was average and a non-smoker.

Once we get into the medical and lifestyle questionnaires things get a little complicated, but even for Jon Snow, who’s had his share of medical mishaps, it’s not impossible to get insured. We did the leg work and went through each of our partner life insurance companies to make sure we were able to get him the best rate and coverage for his particular circumstances, just as we do for all our clients.

Surprisingly, there wasn’t a great deal of difficult medical history. He’s a healthy lad hardened by life in the North, and only the occasional stabbing seems to slow him down. With that in mind, we considered the most notable of his past injuries.

Death, and subsequent resurrection. It may come as a shock, but this isn’t a medical concern that is available on your average life insurance questionnaire. Instead, we chose to get this quote with a history of heart attack, reasoning that his heart had, in fact, stopped when he was killed. In the end, the life insurance company did exclude this particular medical issue from coverage, but we were still able to get coverage for for him at a higher premium.  It may surprise many people, but medical history such as heart conditions, diabetes and many forms of cancer don’t automatically prevent you from getting coverage.

Family history:...Complicated, but generally healthy as far as we can tell, though Jon was adopted and probably wouldn’t know many details.  If you, like Jon Snow, are adopted, not knowing your biological family medical history doesn’t have to be an issue. Be sure to discuss this with your broker.

Hazardous activities: While White Walker slaying and dragon petting are not options, we did assume that he would be involved in certain hazardous activities such as horseback riding and fencing. Again, these activities were excluded from coverage, but didn’t automatically prevent the policy from being accepted.

And there you have it. After doing a thorough assessment of Jon’s medical history, lifestyle and going through the financial goals he’d be wanting to consider, we looked across the market to get Jon the highest standard of life insurance available. Our advisers would love to be able to do the same for you!

Contact us today to schedule a chat with the broker nearest you.

***This information is provided for entertainment and illustrative purposes only,  and should not be taken as insurance advice. Please speak to a qualified professional to assist you with making choices that are best for your specific situation.
Share This Page: 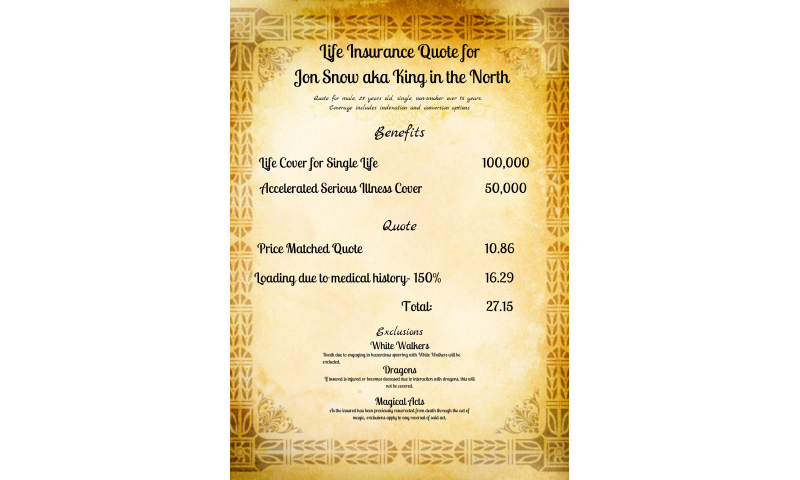 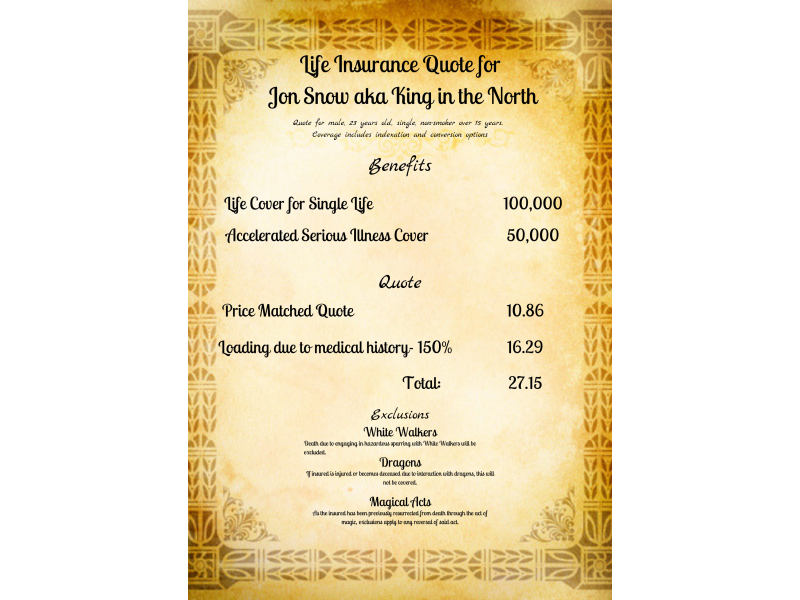